Things To Do in Madeira Beach Florida
by Tiffany Wagner 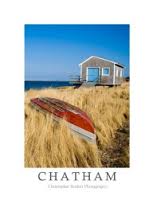 Chatham, Massachusetts boasts a beach culture that is known for being a true "walking town." Main Street is home to numerous quaint family owned shops, restaurants, and businesses. During the summer, visitors enjoy strolling over to the Main Street gazebo for an evening concert or to the fields where the Chatham Anglers baseball team plays, as part of the Cape Cod Baseball League on the peninsula for collegiate-age players. For travelers looking for a small town retreat-a visit into another way of life-devoid of the busy chatter of home and full of unique character and charm, where the pastimes are strolling on a beach, fishing off the pier and partaking in some fresh local seafood~ Chatham, Mass presents a worthy vacation destination!

Chatham is a town in Barnstable County, Massachusetts, located at the "elbow" of Cape Cod and surrounded on three sides by ocean. The town has a total area of 24.4 square miles and an approximate population of 6,625 in the winter and 30-40,000 in the summer. Before Chatham's European colonization, Native American tribes inhabited the area-specifically the Nauset and Monomoyick Tribes. Once the French explorer Samuel de Champlain arrived in Chatham, it didn't take long before it became a fight over who had the right to be there. Eventually the French left giving up the idea that they could create a French foundation of state and were followed up by the English. Fifty years later, the first English settler, William Nickerson, arrived and began the long journey of establishing his own stake in the land of Chatham. Over the years, a small handful of English settlers followed Nickerson and thus began the beginnings of the little fishing town of Chatham. The community became a shipping, fishing, and whaling center. Chatham's early prosperity left it with a considerable number of 18th century buildings, whose charm helped it develop into a popular summer resort. Chatham is home to the Chatham Lighthouse, which was established by President Thomas Jefferson in 1808 to protect the ships circling the Cape.

The Chatham Lighthouse and nearby Lighthouse Beach, the fish pier, Chatham Seaside Links and Kate Gould Park's Friday night band concerts are all "must-sees" when visiting Chatham. Just down the road from the Chatham Light is the Chatham fish pier, where there’s always a small crowd gathered on the visitors deck (best viewing is between 12 noon and 3pm, when the fishing fleet is returning). Offering a great view of Chatham's harbor and outer beach with the Atlantic beyond, the pier is where the fishing boats unload their catch while both children and adults get a fascinating glimpse of the Cape's best-known, although now waning, industry. The Pier is where many get fish to go from the market or sit down for some fresh local fare at the outdoor clam shack. Another of the treasures of the area is the Monomoy National Wildlife Refuge where many flock to see the gathering of migratory birds. So whether it's the historic Lighthouse, the Railroad museum or simply the serene Chatham beaches with old world or cape shack seafood eating- Chatham provides a vacation location for those seeking a quaint and pleasant respite with stunning scenery and authentic charm.

For more information visit the Chatham Chamber of Commerce: http://www.chathaminfo.com/