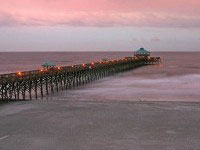 The city of Folly Beach is located on historic Folly Island, in Charleston County, South Carolina, United States. Folly Beach in South Carolina is a beautiful city known for its beautiful beaches and stunning scenery. 7 miles of walking beach and 8 miles south of historic downtown Charleston. The pristine beaches of Folly Beach provide the perfect venue for a variety of activities and draw a lot of visitors throughout the year. People build sandcastles with the kids, fly a kite, and/or play bocce ball on the beach. The part of beach called the Wash Out, also serves as a major attraction for surfers in the area.

Fishing is a also popular leisure activity for beach goers. The Edwin S. Taylor Fishing Pier is the main place for Folly Beach fishing. Visitors also stop by the local tackle shop to purchase bait and rent all the gear they need for a day of fishing on the pier. A variety of local fishes, ranging from Giant Drum and King Mackerel can be caught using this bait.

The Morris Island Lighthouse is a popular stop for Folly Beach visitors who are inclined towards exploring Low country history. The Morris Island lighthouse structure was built for the first time in 1767; it was destroyed and rebuilt three times. However, the lighthouse no longer functions as a navigation aid but continues to be enjoyed as a historical landmark and architectural and nautical beauty.

Find Rentals works with the best vacation rental management companies in the area to offer some of the trendiest accommodations in the Charleston area of Folly Beach, near parks, and other areas of interest. Choose from a large selection of beach cottages, family homes, condos, pet friendly accommodations, and more. Guests working with vacation rental management companies on Find Rentals will experience amazing service and save on extra booking fees.

Fred Holland Vacation Rentals and Real Estate have specialized in the Charleston Folly Beach Area since 1973. At Fred Holland Realty, we know the..  learn more

At the start of the 20th century, Folly Beach remained fiercely independent as the seeds of today's sea island town were being sown. In 1930 the construction of the new Atlantic Pavilion (to replace the original Pavilion built in the 1920s), boardwalk, pier, and Oceanfront Hotel began. Very few families lived on the island year-round, some of which owned the Folly Beach real estate.

Folly Beach saw the beginning of its Golden Era in real estate in the 1960s with the opening of the Ocean Plaza, which included 1,700 feet of boardwalk, pier, amusement rides, shops, roller skating, and concessions. The first surfboard also came upon Folly Beach during the same time.

Artists, writers, and musicians have in the past arrived at Folly Beach in throngs, and they feel right at home in the prevailing carefree atmosphere. Folly Beach is also tempting to those who yearn for outdoor activities - boating, fishing, swimming, bicycling, jet-skiing, parasailing, kayaking, surfing, and beachcombing - to fill all their spare moments.

Things to do and see in and around Folly Beach

“Folly” is an Old English word, which stands for an area of dense foliage.

Beginning of Colonization On Folly Beach

The American Indian tribe Bohickets, were the first known inhabitants of the barrier island that overlooks the southernmost edge of Charleston Harbor. The many creeks that weaved throughout Folly Beach SC, along with the lush maritime forest teeming with wildlife, provided these early islanders with the required supply of food and water. By the late 15th century, European colonists started arriving at Folly Beach, which forced the Bohicket Indians to abandon their homes.

The Folly Beach SC was deeded in September 1696 through a royal grant to William Rivers, which led to the beginning of an era of private ownership for Folly Beach. During the years prior to the Civil War, the somewhat isolated Folly Beach was known as “Coffin Land,” an epithet given to the island as it was a spot where ships entering Charleston Harbor often left passengers suffering from the plague or cholera.

During this pre-war period, Folly Beach served as a hiding place for pirates, who barely visited the place, leaving the few adventurous permanent residents and earliest owners of Folly Beach real estate to govern for themselves.

Folly Beach played an important role in the Civil War during its initial days, first for the Confederacy, and later for the Union. The first skirmish of the conflict reportedly happened in January 1861, when Citadel Cadets stationed on Morris Island, located at the eastern-most tip of Folly Beach, fired on the Star of the West, an unarmed mercantile paddle-wheel steamer sent to re-enforce and re-supply Fort Sumter, and successfully forced the ship to retreat.