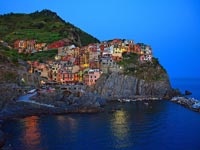 Nicknamed Il Bel Paese (The Beautiful Country) Italy is well-known for its fine art and historic monuments scattered throughout the country. In few places do art and life intermingle so effortlessly in this land of Dante, Michelangelo, da Vinci and Botticelli. Italy's exquisite cuisine is famous worldwide as well as its high fashion, luxury sports cars, diverse regional cultures, beautiful coasts, alpine lakes and mountains (the Alps and Apennines). No wonder the people of Italy are touted as living the beautiful life!

Italy, known for its boot shape, is a peninsula set in the Mediterranean Sea, bordering France, Switzerland, Austria, and Slovenia.  Italy is surrounded by the Ligurian, Sardinian, Tyrrhenian, Sicilian, Ionian and Adriatic Seas. Being one of the largest countries in Europe, Italy-coupled with Greece-is predominantly responsible for the birth of Western culture. Ancient Rome was, at first, a small village founded around the 8th century BC. In time, it grew into an empire covering the whole Mediterranean and as far north as Scotland. The 2nd Century began the decline of the empire leading to the start of the Dark Ages. Around the year 1494 and beyond, the French and the Spanish invaded Italy continuously and the Austrians dominated the northern part of the empire. The kingdom of Italy lasted from 1861-1946. While Giuseppe Garibaldi unified the Southern territory of Italy, the north wanted to become its own state and named Turin as their capital. By 1870 Rome was named as the new capital of Italy. Beginning in 1922, Benito Mussolini led a coup-the start of the fascist party in Italy. Their March on Rome resulted in an alliance with Germany. During the Second World War, Italy was invaded by the Allies in June 1943, leading to the collapse of the fascist party and the eventual death of Mussolini. Italy surrendered in September of 1943. While Italy became a republic in 1946, in the 1950's it joined NATO and allied itself with the United States. This alliance brought great economic relief to the country and as a result, Italy experienced a great rise in industrial production and cultural growth. This time in the country is referred to as the "il boom", which saw the country's rise from a poor and weak nation, to a powerful one. From this time on Rome has become a popular tourist destination- to discover it's rich history born through struggle and its reputation for La Dolce Vita~ the good life!

The Italian islands, such as Sardinia and Sicily, make great vacation destinations with their beautiful white sand beaches, picturesque coastline, rich historical and archeological sites and charming towns and villages stacked up in all their colors along the mountainside. For tourists who love food, Italy offers tours traveling from one small town and table to another -with an exciting adventure in culinary learning right next to Italy's very own native chefs. Traveling by train is usually the best option for visiting large and medium-sized cities. Where can you go on the Italian train? Check this Italy Rail Map on Europe Travel. Central Italy's Umbria and Marche regions hold interesting ancient abbeys in an area called the ring of monasteries. East of the hill town of Gubbio, the regions become mountainous and this isolated area was perfect for getting away from the world. Of course for any visitor to Italy, Rome is a must see with its vibrant city with reminders of its past everywhere. In Rome encounter ancient monuments, medieval and Renaissance buildings and ornate fountains. Some of the most desired travel destinations in Italy are Florence, Rome, Venice, Tuscany, Milan and Naples. Whether your dream vacation to Italy includes the David in Florence, the Colosseum in Rome, the opera in Verona, the spectacular vistas in Amalfi, or simply breathing in the exuberance of Italian life, your trip to Italy will stay with you forever.