Factors When Renting Property For Short Term
by Kelly Reed

Things To Do in Ellicottville New York
by Anthony Vaarwerk 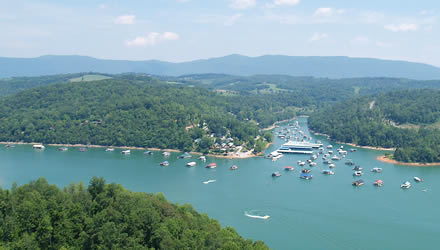 Norris Lake is a lake in the Tennessee state of United States. The lake is a combination of two rivers, the Clinch and the Powell River. Norris Lake stretches 72 miles up the Clinch River and 56 miles up the Powell River. It covers 33,840 acres of water and 809 miles of shoreline including 50 miles of island shoreline. At its widest, Norris Lake is 1.2 miles wide. Norris Lake sits on the foothills of the Cumberland Mountains and it provides picturesque views of the mountains from its fresh, warm clear waters. The warm water is a residence to many species of fish like large mouth bass, small mouth bass, walleye, rock fish etc. Norris Lake is also the largest reservoir on the Tennessee River system. In the recent times, it has become a spectacular Tennessee attraction for all kinds of water sports.

History of Norris Lake and Norris Dam, TN
During 1911, the location for a future dam development in the upper Tennessee Valley was discovered. The future development site, which was named "Cove Creek Site" at the time, was chosen due to its natural landscape and ability to host a large dam. On October 1, 1933, the project of the first dam in Norris Lake, the construction of Norris Dam was assigned to the relatively new Tennessee Valley Authority (TVA). The budget proposed for the project was over $32 million dollars. Flooding had been an area of concern for the Tennessee valley for quite some time, and the goal of Norris Dam was to bring some stability to the uncontrollable and unpredictable flooding as well as provide a substantial self-generate power source to the area. The dam was eponymously named in the honor of long time supporter of TVA and Nebraska Senator, George Norris (1861-1944).
On March 4, 1936, the construction of Norris Dam was completed with the gates closed. The finished dam stood 1,860 feet long and 265 feet high. By January of 1937, the Norris Reservoir was filled completely, leading to the creation of the largest reservoir on a tributary of the Tennessee River. Norris Lake hosts 33,840 acres of water surface and approximately 809 miles of shoreline. The Norris Dam, a project of TVA, also proudly delivers a maximum energy delivery of 131,400 kilowatts.
The entire construction process of Norris Dam and the reservoir required massive purchases and acquisitions. Over 152,000 acres of land were purchased during the duration of the project; 2,841 families and 5,226 graves were also relocated to provide the construction area needed for the huge TVA project. Norris town, TN was initially founded and built as a shelter to all of the thousands of workers involved in the construction of Norris Dam.
The Tennessee Valley Authority (TVA) was formed at the beginning of 1933. Its formation was a part of President Franklin D. Roosevelt's New Deal. The President's legislation granted TVA the power to begin construction just a short time after its establishment.
Norris Dam, which located in East Tennessee and just off of I-75, proudly stands even today. It provides power to thousands and provide stability and flooding control to the Tennessee Valley and all the 5 counties surrounding Norris Lake.
Tourism in Norris Lake
Thousands of families and visitors visit Norris Lake every year as it offers a beautiful scenic escape. The breathtaking rolling hills in the surrounding perfectly frame the placid and amazingly clear turquoise-green deep waters. For those seeking a picturesque majesty, Lake Norris is indeed a rare and treasured find. Activities like fishing, swimming, vacationing, boating, tubing, wakeboarding, water skiing, kayaking, canoeing, hiking, trails and camping are in abundance at Norris Lake. Apart from offering relaxation and peace and a new adventure with outdoor beauty to explore, the areas surrounding the Norris Lake entice you to return again and again with their sheer magnificence. Norris Lake also has many hidden private coves along its long and winding shores as well as several miles of hiking trails through the hills. There is plenty of water and land to explore to have an absolutely amazing vacation.