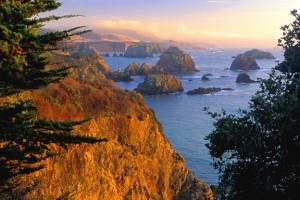 Mendocino, California is a vacation destination few travelers have been able to resist and once discovered make it a "must go" on their list! The place is full of charm, warmth and wonder for every structure speaks of history, from the redwood water towers to the fences and houses whose wood is weathered by the salt air, the fog and the wind. The entire town is named in the National Register of Historic Places, and it’s easy to see why. Enchantment exudes from the architecture, picket gates and lush gardens spill over with rose and berry bushes sending the senses back to the 19th century.

Here at Pacific Blue Vacation Rentals, we make it our business to exceed your expectations, and we will help you find the luxury vacation home that is..  learn more

Mendocino California is located 9.5 miles south of Fort Bragg, at an elevation of 154 feet. The population is approximately 824. The town's name comes from Cape Mendocino, named by early Spanish navigators in honor of Antonio de Mendoza, Viceroy of New Spain. Despite its small size, the town's scenic location on a headland surrounded by the Pacific Ocean has made it extremely popular as an artist colony and with vacationers. The town was founded in 1850 as a logging community, and was originally named Meiggsville after Henry Meiggs. Many of the town's early settlers were New Englanders, as was true with many older Northern California logging towns. Portuguese fishermen from the Azores also settled in the area, as did immigrants from Canton Province in China, who built a Taoisttemple in the town. Mendocino's economy and population declined after 1940 leaving the town isolated and wanting. The revitalization of the town began in the late 1950s with the founding of the Mendocino Art Center by artist Bill Zacha.

Today, Mendo, as it's affectionately known by locals, is flourishing, with eclectic galleries dotting the historic downtown, nightlife driven by gallery openings and performances, and art lovers from all over the world flocking to enjoy it all. Here are our picks for an art-centric getaway, as well as ideas for exploring the source of so much inspiration: the Mendocino Coast's spectacular scenery, with windswept cliffs and waves crashing against the rugged shoreline. Take a horseback ride with Ricochet Ridge Ranch on a deserted Ten Mile Beach, through vast cattle ranches overlooking the ocean, and through magnificent redwood forests!  Caspar Headland State Natural Reserve is located on the Pacific Coast in Mendocino County approximately 4 miles north of the town of Mendocino. Bordering the reserve to the north is Caspar Beach and RV Campground, and further north the town of Caspar. For the history buffs, The Ford House, located in historic Mendocino Village, offers both historic and current information about the area. Also, the Kelley House Museum is an historic house museum in the heart of Mendocino.  The home was built in 1861 by William Kelly, one of Mendocino’s founding fathers, and now contains 19th Century furniture. The ocean-view home sits on an acre of gardens, with a pond and three resident geese. One of Mendocino's wonders is Glass Beach-one of the most unique beaches in the world. Back in 1949, the area around Glass Beach became a public dump of old cars and household garbage, which of course included lots of glass. By the early sixties, some attempts were made to control what was dumped, and dumping of any toxic items was banned. Now, over 30 years later, Mother Nature has reclaimed this beach. Years of pounding wave action have deposited tons of polished glass onto the beach. You'll still see the occasional reminder of it earlier life, such as a rusted spark plug, but for the most part what you'll see is millions of pieces of glass sparkling in the sun. In addition to searching for and collecting glass, Glass Beach has a very interesting array of tide pools to explore. Crabs, mollusks, and many aquatic plants make their homes in these ever changing environments. It is very easy to spend your whole day poking around the tide pools and watching the busy little worlds that go on inside each one. Another of the most popular visitor attractions in California’s North Coast is the Skunk Train-considered to be one of the ten most scenic rail trips in North America. The view is all but unchanged: towering trees, deer drinking from the Noyo River, an isolated fisherman's cabin peeking from the forest. With occasional whistles as it chugs through tunnels, over bridges and past open meadows, the train follows the same coastal "Redwood Route" as it has since 1885. Trains depart from both Fort Bragg and Willits. Among these activities, Mendocino offers kayaking, bicycling and boating in the beautiful Noyo Harbor of Fort Bragg. The memorable attractions of the North coast of Mendocino will leave vacationers coming back for more for years to come.