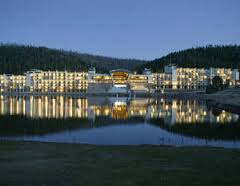 Ruidoso is high in the magnificent Rocky Mountain Range in the southeastern corner of New Mexico. Towering above the Village of Ruidoso is Sierra Blanca at 11,981 feet above sea level and the natural beauty of this one of nature's many wonders will take your breath away.  The weather you will experience in Ruidoso is mild and perfect for enjoying these natural wonders that abound in the area of Lincoln County and in the captivating Lincoln National Forest.  Come and enjoy yourself in the perfect spot for year-'round entertainment and tranquil relaxation.

Ruidoso, a luxurious mountain resort town, sits in the rocky Sierra Blanca Mountain Range of the southcentral region of New Mexico.  There, it joins with the Sacramento Mountains just south of the region.  Elevated at 6,920 feet (2,110 miles) above sea level, the village receives its name from the Rio Ruidoso, Spanish for "Noisy River," a small stream that runs through the city.  Ruidoso is a quickly expanding resort village due to the region's stunning alpine surroundings, the Ruidoso Downs racetrack, and the slopes of Ski Apache, the Native American Mescalero Apache Tribe-owned ski resort on Mount Sierra Blanca, a 12,000-foot (3,700 m) mountain towering over this little ski resort town. The still-present Apache tribe additionally runs the Inn of the Mountain Gods resort in the area, including a golf course, casino, and hotel.  Ruidoso is the most largely populated "village" in Lincon County consequently is the economic hub of the entire region.

Ruidoso, New Mexico's history could be named a real "Wild Western." It is a place where the Wild West-- an intriquing part of the United States' history-- was reality for all who surrounded it. Cattle barons, Native American warriors and Billy the Kid is a prominent figure in the history of the city and county--a true "cow boy and Indians" history.  Founded in 1869, Lincoln County made up twenty five percent of the entire New Mexico Territory, spreading out over twenty nine thousand square miles. At that time, it was the largest existing county in all of the United States. Fort Stanton was built in 1859 to protect white settlers from the Apaches. Ranchers and farmers first settled on the low-lying prairies and along the Hondo River. Even from the very beginning, early tourists were already becoming attracted to the Ruidoso area as it offered a place to escape the desert heat.

Come to Ruidoso and delight in all-year-'round entertainment and escape. Here, you will find the Ruidoso Downs Race Track.  This beloved crowd-pleaser is where the wealthiest race for quarter horses in the entire world calls its home; the All-American Futurity. Ski Apache ski slope is the ideal picturesque ski resort for both skiers and snowboarders of all levels and amounts of experience. The Ruidoso region declares two of New Mexico's very best casinos its own: Inn of the Mountain Gods and Billy the Kid Casino. The Spencer Theater for the Performing Arts is a world class performance hall. There is live music at many Ruidoso venues including the renowned country western bar Win Place and Show, outdoor cafes and many Ruidoso restaurants . For the active vacation, this area includes a few of the greates outdoor recreation opportunities that there are including highly suggested golfcourses, horseback riding, the Golden Aspen Motorcycle Rally, the Aspencash Motorcycle Rally, high altitude bicycling, camping , hiking, skiing , golf, tennis, art galleries , museums and shopping aplenty. With all Ruidoso has to offer, the top rated activity in Ruidoso remains relaxing and enjoying the magnificent mountain views and the cool pines.