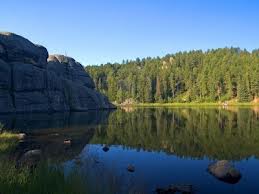 Head for the hills - the Black Hills of South Dakota! The best place to take the "scenic route" and wind through the lush green trees, snow capped or not, stunning in every seaon. The mountains, canyons, grasslands and forests are as abundant to the area as its fascinating culture and history. The Black Hills host dozens of monuments, museums, statues and state parks sharing its heritage with all who pass through. Once only known for its wood and gold, the Black Hills has become prosperous in hospitality-welcoming countless vacationers annually to its grand selection of vacation properties and outdoor excursions - a true treasure of the West North Central U.S.

Executive Lodging of the Black Hills

Given the name, Black Hills because of the dark visage of trees covering the expansive rolling landscape, the mountain range spreads from the Great Plains in the western part of South Dakota all the way to Wyoming. Visiting Harney Peak, located in the Black Hills National Forest, one can experience not only the summit of the Black Hills but also the highest peak in the United States east of the Rockies. It is said that it was the Native American people who first set foot on the land of the Black Hills- tracing its history as far back as 7000 BC. From the Arikara to the Cheyenne, Crow, Kiowa, Pawnee to the Sioux Indians-each tribe, one right after the other, set their stake in the ground and left their mark on the land. In 1743, while the Sioux also known as the Lakota Indians inhabited the Black Hills, the first European settlers arrived and thus began a long war over the possession of the land. Although the government signed a treaty in 1868 forbidding the Black Hills from white settlement, the 1874 European American discovery of gold in the black Hills resulted in the governmental reinstating of white settlement and the forced relocation of the Lakota Indians into other areas of South Dakota. Since then, the Black Hills area has grown from a livelihood based on mining and timber to that of a booming hospitality industry. Today the Black Hills are home to a beautiful offering of vacation communities in such towns as Sturgis, Rapid City, Keystone, Hot Springs and Deadwood, to name a few. Divided into two areas, the Northern and the Southern Hills, both areas attract hundreds of thousands of visitors every year- there to discover and celebrate the richness of this land.

A visit to the Black Hills carries with it great opportunities to learn much about the natural, breathtaking beauty that surrounds on every side. Begin with Mount Rushmore National Memorial, meander through the caves at Wind Cave National Park and Jewel Cave National Monument or check out the world’s largest mammoth research facility, Mammoth Site in Hot Springs. Motorcycle enthusiasts from all over the country gather during August every year for the Sturgis Motorcycle Rally- a tradition since 1938. Known for accumulating over 200 hundred inches of snow a year, the Black Hills area is a favorited destination for winter sports such as snowmobiling and skiing with over 350 miles of snow covered trails and some of South Dakota's top ski resorts. So whether you are looking for a nature retreat or an extreme sport adventure, the Black Hills of South Dakota has that and more to offer- a rich historic treasure for all to discover and remember for years to come.